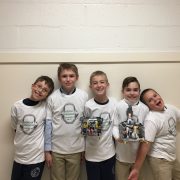 Two of Our Lady of Mercy’s First Lego League Teams have qualified for the Rhode Island First Lego League State Championship after their outstanding performance in the Qualifier at Portsmouth Middle School on Saturday, December 10. First Lego League provides youths with an introduction to Robotic Engineering and real-world problem-solving skills. Each team that competes must design a solution to a real-world scientific issue and program a robot to perform lego mechanism missions autonomously in a timed competition. This year’s theme is Animal Allies.
OLM’s “Team Land Sharks” is trying to reduce the amount of sharks killed from bycatch. Through research and visits from local experts, these students have found that shark populations are diminishing at a rapid rate. To keep our Ocean food chain healthy and in balance, sharks need our help. In New England, many livelihoods depend on fishing and our students think they have a solution that is helpful to sharks and easy to adapt by current deep sea fishermen and women. They have engineered a prototype that can be retrofitted onto existing nets/hooks. These students believe they can repel the shark’s electroreceptors (ampullae de Lorenzini) using these magnetic “dots”.
The “Microchip Megalodons” from OLM are trying to save our Tree Swallow friends. Many say watching swallows in the sky is like watching a ballet. People flock to migration sites to watch these birds perform their natural sky dance. Some are facing a bit of a problem, however. They have found homage in an invasive species of phragmites. The Microchip Megalodons have designed a way to get rid of the phragmites without disturbing the tree swallows’ homes. Using the school’s 3D printer, they have made a model of a new bird condo that can house the same thousands that now live in the phragmites.
These two teams have done an excellent job on their projects and worked tirelessly programming their robots. OLM’s remaining teams, Crabby Crew and Parrot Pals, have also been hard at work preparing for their competition at the Pier Middle School Qualifying Tournament on December 17th. Crabby Crew is a middle school team that has an innovative solution to an invasive Asian crab species. The Parrot Pals, OLM’s first all girl team consisting of 4th and 5th graders, want to help our Parrot friends that many times outlive their owners.
The First Lego League State Championship will take place on January 14 at Roger Williams University from 12-3 p.m.