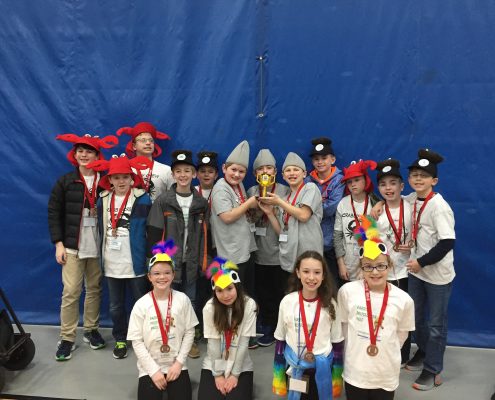 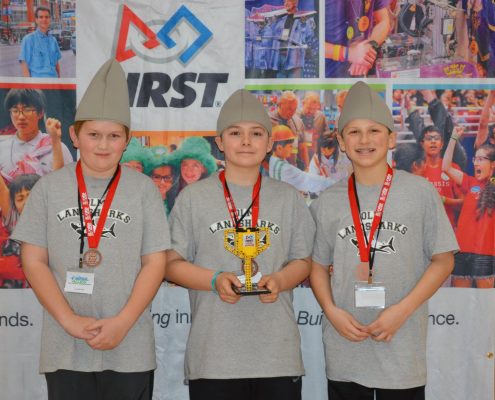 Our Lady of Mercy’s First Lego League team “Land Sharks” earned the Judges Award at the State Championship Robotics Championship on Saturday, January 15 at Roger Williams University. First Lego League allows students to explore the field of engineering with real world problems that need solving and robot design missions. Each year, teams must compete at qualifiers to proceed to the State Championships. 8o -plus teams competed and along with 36 others, 4 Our Lady of Mercy teams advanced to the State Championship.
The theme of this year’s event is Animal Allies and each team has to solve a problem that existed with Animal and Human Interaction. The OLM team “Microchip Megalodons” wants to remove an invasive species of phragmites while not interfering with the habitat of tree swallows. The “Crabby Crew” has found a good use for the invasive species of Asian Shore Crab which could create more jobs for our fishermen and limit their population, also limiting their effect on our other shellfish species. The “Parrot Protection Pals “ are trying to move legislation so parrots that outlive many of their owners are protected with insurance before purchase supporting after-pet owner life care.
The award-winning “Land Sharks” are focused on protecting our Lions of the Sea. Sharks are at the top of the food chain in the sea and while their reputation does not make them cute and cuddly, they are one of our biggest allies in healthy fish populations. Some sharks are ending up on the endangered list. One of the main culprits of this decrease in population is bycatch, accidental capture in nets and hooks of deep sea fishing. The Land Sharks’ innovative solution includes a prototype of a magnetic net that would repel sharks. The attached magnets could also retrofit existing nets and hooks. The team talked to many experts at Biomes, Save the Bay, and URI to get their expertise on Shark behavior and existing solutions. The Judges Award is for a team that the judges encounter whose unique efforts, performance, or dynamics merit special recognition. The “Land Sharks” showed that they could work together and create an innovative solution to help animals and humans interact without hurting our delicate ecosystem en route to earning the coveted award.
For complete results from Saturday’s events, please visit http://www.risf.net/