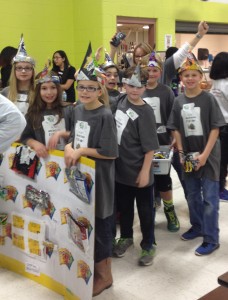 East Greenwich, RI —  On Saturday,  December 12th,  Our Lady of Mercy School’s Recycling Rhinos First Lego League Team competed in its first qualifier and advanced to the Rhode Island FLL Championship event.  The qualifier, held at the Ricci Middle School in North Providence, included 20 teams of students in grades 4-8 from around the state.  Students have been working since September on the project and robot game to help find a solution to the overwhelming amount of trash we produce. Under the guidance of coaches Bea Lukens and Pam Burdon, The Rhinos worked hard finding a problem they could solve, and an overabundance of chip bags were an evident problem right here in our school. The students found that, because of the material they are made from, chip bags are not recyclable. The school was producing at least two large garbage bags full of chip bag debris each week. On a mission to reduce what was going into the trash, the team found ways to reuse the chip bags and even had a school-wide contest to raise awareness. The students made reusable shopping bags, eclectic purses, earrings, and so much more with their creative minds and trash treasures. All in all the students have seen a reduction in the amount of single serve chip bags coming from the cafeteria and now only collect 1 bag a week. The students will spend the next month before the championship tournament on January 16 at Roger Williams University to find an even better solution for the chip bag waste. In addition to the project, the students must compete in a robot game designing and programming a robot to do tasks on an 8’ by 4’ table.