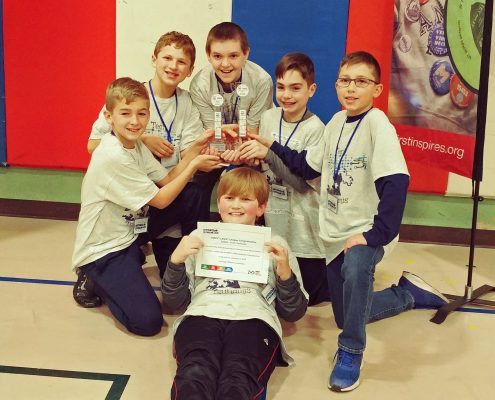 The OLM Robotics Program continues to add trophies to its case with stellar performances this year.    At this weekend’s Air 4H Qualifying Tournament at Portsmouth Middle School,  “Team Tech Tsunami” from OLM received the First Place Champions Award and also First Place in Robot Performance.  The group has been working long hours programming their robot and developing a solution to the problem of septic water in our human water cycle. Their solution filters dirty water and uses it to fertilize your lawn.   Follow these students on their journey at #olmtechtsunami.   The next step will be the Rhode Island State Championship at Roger Williams University on January 13, 2018.

Rhode Island Students of the Future has hosted Four First Lego League Qualifying tournaments, all sponsored by National Grid, Textron Charitable Trust and the Verizon Foundation, during the 2017-18 Hydro Dynamics season.  On Sunday, December 10, OLM School’s All-Girls First Lego League Team, “The Reigning Robots,” received the coveted judges’ award at the All Saints Academy Qualifier in Middletown, RI.  First Lego League introduces programming and problem solving to students around the world. The OLM Girls were recognized for their stamina and positive attitude throughout the match.

OLM Reaches Out to Others During Christmas Season
Scroll to top