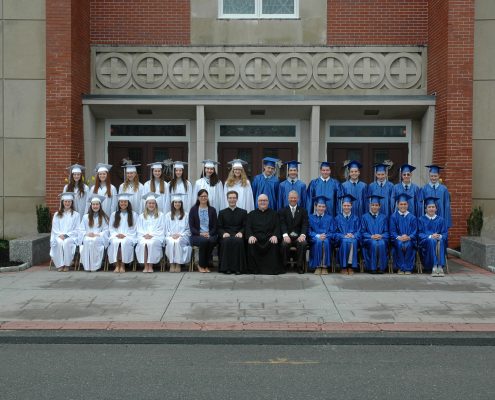 OLM School held graduation ceremonies for its 8th graders on Monday, June 12 at OLM Church.  In a ceremony let by OLM Pastor, Father Bernard A. Healey and OLM School Principal, Scott W. Fuller, the OLM graduates received their diplomas and listened to speeches and readings by their fellow graduates. They also sang the school song “Circle of Mercy” while giving roses to their parents as a sign of gratitude. The Address to the Graduates was delivered by Student Council President Casey McQuesten.  He quoted Olympic Swimmer Michael Phelps in reflecting on the class’s makeup of “believers, doers, thinkers and dreamers” and encouraged them to practice these virtues into high school and beyond.

Of the 24 graduates, 8 boys will be attending Bishop Hendricken High School and six girls are heading to St. Mary’s Academy, BayView.  Five students are attending LaSalle Academy, two are headed to Prout, two to North Kingstown HS and one to Exeter-West Greenwich.  At an awards breakfast on Sunday, June 11 which was held after the graduates celebrated mass as a class with the parish community, several students were honored with individual recognition for excellence in a variety of subject areas.

❖ Academic Awards:  Awards are given to students who achieve exceptional grades, participate in class, and show enthusiasm for the subject.

Our Lady of Mercy Is Proud of Our Alumnus Father Brian Morris!