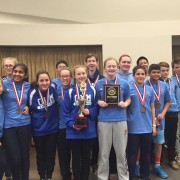 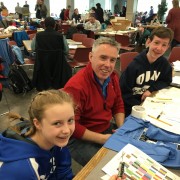 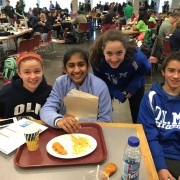 Our Lady of Mercy School’s Science Olympiad Team, made up of 19 6th, 7th, and 8th graders, placed second in the middle school division at the RI State Science Olympiad Competition at Rhode Island College on Saturday, April 9.

After a two year hiatus from the competition, OLM students proved they remain a force to be reckoned with, tallying 4 gold medals and 3 bronze. Out of 24 teams, OLM finished in the top 10 or higher in 19 of the 22 events. Points are awarded based on the teams’ finish in each of the 22 events.

In 11 years of competing with a full team in the state Science Olympiad, OLM has earned a reputation as one of the top teams in the state. They have won six state titles, including four consecutive from 2006-2009, and back to back titles in 2012 and 2013. This is the team’s fourth second place finish, with the others coming in 2004, 2005 and 2010. Several OLM parents and friends volunteered their time as coaches, helping prepare the students with weekly meetings and study sessions, beginning in the fall.