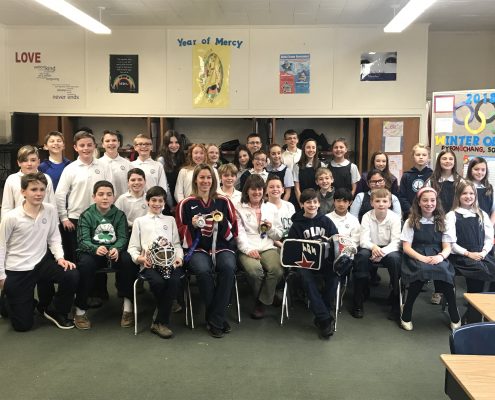 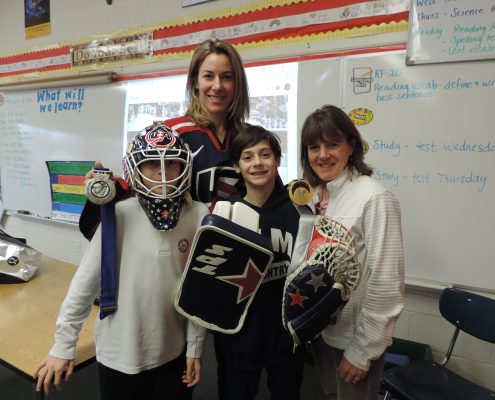 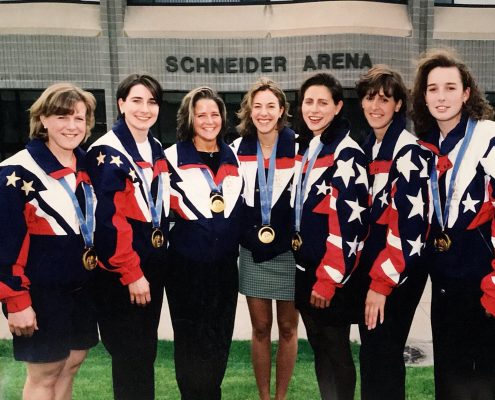 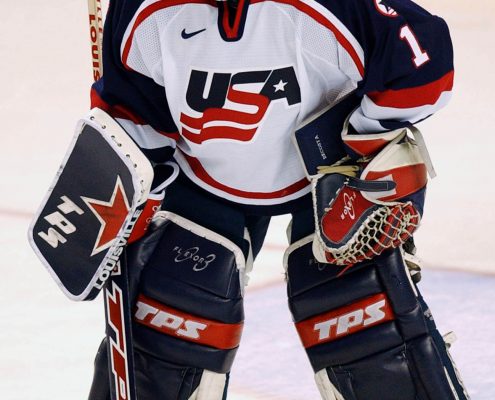 Students in the fifth grade at OLM School were treated to a visit from two Olympians on Monday, Feb. 12.  One was quite familiar and the other was a surprise guest.  Sarah DeCosta Hayes, whose own children attend OLM school, decided to surprise her twin sons and their classmates by bringing along teammate Lisa Brown-Miller, or “Brownie” as she is called.   The pair were members of the 1998 Team USA Women’s Hockey Team that brought home a Gold Medal from Nagano, Japan.  They were fresh from a weekend of celebrations at their alma mater, Providence College, where they and several other members of that storied ’98 team were honored, marking 20 years since they captured the Gold.  Out of 20 players on the team, seven played for PC.

With Hayes’ twin sons currently in the fifth grade at OLM (she also has a daughter in 7th grade) the students were certainly already quite comfortable with her. But seeing her in her Team USA jersey, toting her Gold (1998) and Silver (2002) medals is not something they see every day.  Around OLM, she’s Mrs. Hayes, but once she starts talking hockey, and the Olympics, she becomes a bit larger than life, doling out life lessons on hard work, sacrifice and national pride. She and Brown-Miller recounted their journey as teammates and lifelong friends, from thrill of the opening ceremonies to the sacrifices of missing Christmases with family, and the pride of representing their country at the Olympics.  Brown-Miller, who at 5’1’ and 31 years old, was the shortest and oldest member of the 1998 team.  She didn’t let that stop her though, telling the students, “Find something you love, something you’re good at, and you can do anything you want to do.”  According to Hayes, “She was fierce. If she went against the boards, she always came away with the puck.”  Despite their difference in age (Brown-Miller actually tried to recruit DeCosta to come play at Princeton where she was coaching the women’s team in the mid-90’s) the two have been friends since they started training together over 20 years ago.  Their visit incorporated a social studies lesson as well.  As Hayes stated, “The Olympics brings everyone around the world together.  Like what’s happening now with North and South Korea. For those few short weeks, the world is at peace, and it’s an honor to be an athlete representing your country during that time.”