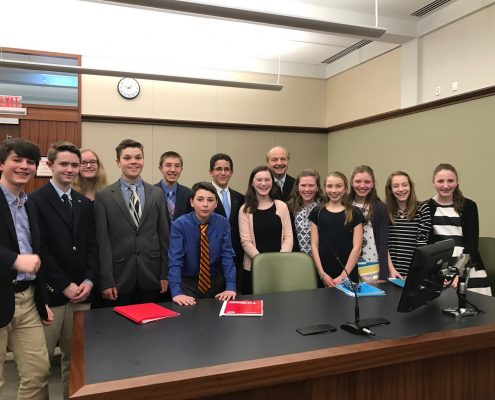 Our Lady of Mercy School’s Mock Trial Team, made up of 13 6th, 7th, and 8th graders prevailed in both trials of the statewide Mock Trial competition over the past several weeks.  In the first trial on Tuesday, April 11, OLM’s prosecution prevailed against the defense from St. Philip’s Greenville at the Noel Judicial Complex in Warwick.  On Tuesday, April 25, the OLM defense prevailed against the prosecution from North Smithfield Middle School in a trial held at the Garrahy complex in Providence.   Points are awarded by attorneys volunteering their time in the courtroom and reflect the performance of the team as a whole, not the evidence in the case itself.

OLM has sponsored a Mock Trial program for the past 12 years.  Sponsored by the RI Bar Association and the RI Legal/Educational Partnership, students throughout the state at both the middle and high school levels are given the opportunity to delve into the world of the judiciary system while also exploring their interest in public speaking. At OLM, under the guidance of attorneys/parent volunteers and Middle School Teacher Bethany Bessette, students form teams and assume the roles of attorneys and witnesses in a given case.  The students prepare both the plaintiff’s and defendant’s cases and participate in a state-wide tournament against teams from other schools across the state. Members of the Rhode Island judiciary voluntarily preside over tournament trials and attorneys act as performance judges.  Program partners include the Rhode Island Bar Foundation, the Rhode Island Supreme Court, Rhode Island Department of Elementary and Secondary Education and RSVP.  Many OLM grads who have gotten their start at in the mock trial program in middle school have gone on to achieve tremendous success in Mock Trial programs in high school and even at the college level.

Our Lady of Mercy Is Proud of Our Alumnus Father Brian Morris!
Scroll to top